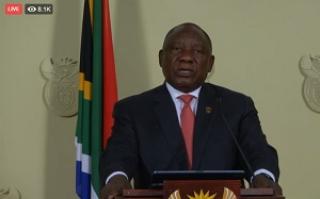 President Cyril Ramaphosa has held a national address to tell the country about the governments plans to deal with the Coronavirus outbreak.

He has announced that the number of confirmed cases has risen to 61. He confirmed that for the first time we are now dealing with internal transmission of the virus.

“We have now declared a national state of disaster in terms of the Disaster Management Act”, announced Ramaphosa. This is will enable us to have an integrated and coordinated disaster management mechanism that will focus on preventing and reducing the outbreak of this virus. We will also be able to set up emergency, rapid and effective response systems.

The urgent and drastic measures to be taken are:

After the President’s speech it was announced that Ministers would be holding specific press conferences tomorrow.