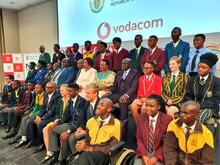 The Minister of Education has released the pass rate for the Matric exams of 2019. She was addressing the country in the presence of the top 20 learners from the class of 2019.

A total of 790 405 candidates sat for 147 question papers in 7 416 examination centres nationwide. A further 212 learners wrote at correctional facilities.

The top performing province was the Free State which achieved 88.4% pass rate, followed by Gauteng with 87.2%. No province performed below 70% which the Minister said she was very proud of.

From next year the Minister promised to report on a wider basket of figures, rather than just one figure.

The province with the highest Bachelors passes is Gauteng. The Western Cape has the highest number of distinctions.